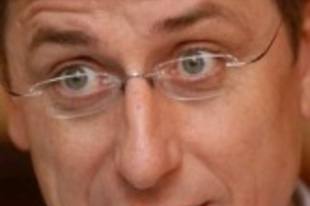 There is an extremely dangerous Hungarian blogger, called Tomcat. A couple of days ago he organised a flash mob against a ticket agency. The office clerks allegedly told a girl (Petra), wishing to buy a concert ticket that she was a fascist. Afterwards she sent an e-mail to an extreme right-wing news site, which published her case on the internet. Approximately in a week, on April 1st, unidentified attackers burnt down the agency by throwing Molotov cocktails at it.

On the day of Tomcat’s flash mob, hundreds of antifascists attended an illegal demonstration against Tomcat and his friends, aimed to stop them from entering the agency. Tomcat and his friends/readers wished to buy some tickets for a Hungarian so-called 'national rock' group's concert (that was the gist of the planned flash mob, they wanted to buy some tickets in the reopened agency).

In the meantime, Tomcat has been organizing a bigger demonstration against the ticket agency for Friday. Ferenc Gyurcsany, the Hungarian PM said he would be there and stand up for the agency. This seems to have been the biggest problem in Hungary for days. It is the Ticketgate.

Oh, Mr. Belpit, your legs are so swollen.
Válasz erre

...and now for something completelly different.
Válasz erre

Pardon me, but I'm off to play the grand piano!
Válasz erre

Call the next defendant!
Válasz erre

Two friends of the Republic. The beautiful friendship goes on!
Válasz erre

I want to go down in celluloid history.
Válasz erre

Some 'hétpróbás gazembers' try to hack the whole astonishing story with a provocative concert before the ticket agency. They are supposed to perform the very famous tracks entitled "Broadway ticket" and "America Wavey Back In My Dreams".
Válasz erre

errr... actually the guy with glasses once told how he adores people in history books.
I would glad to see him there.

Yes, but the "extremely blogger" in fact a businessman,SO the against part ,in aversial consequency: the PM of "Magyars"(??!) a silly, hypoman, psychopatic person... Laughness.
Válasz erre

Two men who have changed the History.

(Excuse me for my English!)
Válasz erre

The members of the band still don't know how the Nazis would react to the so-called 'The High-Heels Polythene Boots Transvestite Show', proposed to be performed in the gap between the two parts of the rock concert.
Válasz erre

This case hase been very ridiculous. Nobody needs to be there our idiot, almost fallen PM on friday afternoon.
Like I wrote already:
Tomcat vs. Gyurcsány
Alien vs Predator
Válasz erre

In this country, could Hungary, exist a Police to?
Válasz erre

It are a fact.
I know because i has studies.